← Transformations of the Knights’ Hall
Agile Development for Space Industry →

The Sanan seppä (Wordsmith) augmented reality application is located in the Turku Cathedral and tells about the changes in the local life caused by the Protestant Reformation in the 16th century. The application is connected with the marking of the 500th anniversary of the reformation in 2017, and it is created during the MIRACLE project, in cooperation with the Turku and Kaarina Parish Union and Evangelical Lutheran Church of Finland.

An objective for creating the app is to study presenting intangible cultural heritage via augmented reality technology, in easily comprehensible form and in authentic locations.

The Sanan seppä Mixed Reality application will take the visitors in the Cathedral to the year 1514, that is, to the situation before the reformation. It then represents the changes during the following decades from a viewpoint of a fictional family. The story, written by author Tytti Issakainen, is told by using objects and historical characters digitally added in the church and made visible on tablet computers. The goal for this app has been to create an experience that is both educating and entertaining. The story is told through eight short scenes in which Hemminki, a son of a blacksmith, becomes an assistant of Mikael Agricola and the progenitor of a priest family. Agricola was one of the most important characters of the Finnish reformation, renowned for his printed works that started the spread of literacy among Finnish common people.

The application runs on a tablet computer. The user sees the scenes on the tablet screen through the device camera view where the virtual characters are added. The app can be downloaded free of charge to user’s own Android or iOS tablet, or a tablet can be borrowed from the church entrance. Besides the actual scenes, the app provides information about the characters and events in the story as well as references to background information in the internet.

The augmented reality solution for the app is based on markerless tracking technology. It enables exact positioning of the virtual elements, making this a case of strong augmented reality. In a historical environment such as the Turku Cathedral it is essential to avoid adding any visible markers to aid the augmented reality tracking. In this app, the coarse positioning solution is based on Bluetooth beacons that are discreetly placed in non-museal objects, like lamps and speakers. Exact positioning and tracking is based on visual tracking of point clouds made of permanent structures in the cathedral. Unity 3D game engine acts as the software platform, and ALVAR library by VTT is used for the visual tracking. 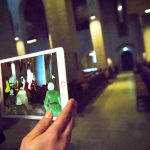 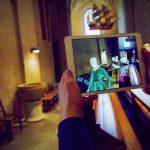 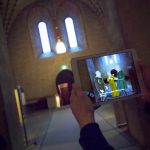 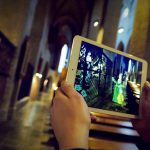