Posted by Timo Korkalainen on Feb 14, 2014 in Uncategorized | No Comments

The Futuristic History project in the University of Turku has completed a mobile application that presents the Holy Ghost Church as a virtual model. Using a tablet computer one can view the whole interior of the virtual church and explore the objects in it. The application was published in cooperation with Casagrandentalo, one of the project partners.

– The model of the church is based on archaeological research and details from other churches from the same era. The objects in the church are also modeled using existing objects of similar age, says the leader of the project, Senior Research Fellow Teijo Lehtonen from Department of Future Technologies of the University of Turku. 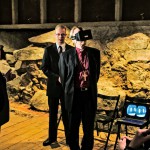 In 1588, King Johan III ordered a new church to be built for the Finnish-speaking residents of Turku. The new building, however, suffered severe damage in a fire in 1593, but it was used afterwards as a cemetery for a great number of local maids, servants and other townspeople.  The church remains were eventually demolished in the 1650s, to make way for a new street plan of the town.

The ruins were revealed in archaeological excavations in the 1980s. Research of the church ruins was led by Adjunct Professor Kari Uotila from Muuritutkimus company. His team’s work has given the shape for the church, very little archival material of which remains.

The church stood at the location now occupied by the Casagrande house, at Linnankatu 3 in Turku. The house contains a significant amount of Finnish cultural history. The oldest known settlement at the location is from the 14th century.

– We understand the significance of the building for the cultural history, and want to share it with all. The Casagrande family aims at continuing the archaeological research and reconstruction of the historic environment, says architect Benito Casagrande. 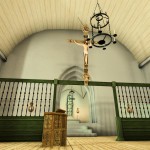 The virtual church application allows free moving and viewing within the church interior, and it offers information about the history of the church and the objects within it. It is available as a free application in AppStore (for iOS) and Google Play (Android). The application supports three languages: Finnish, Swedish and English.