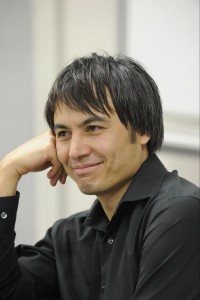 Adrian David Cheok is Founder and Director of the Mixed Reality Lab, Singapore. He was formerly Full Professor at Keio University, Graduate School of Media Design and Associate Professor in the National University of Singapore. He has previously worked in real-time systems, soft computing, and embedded computing in Mitsubishi Electric Research Labs, Japan.

Adrian David Cheok, who was born and raised in Adelaide Australia, graduated from the University of Adelaide with a Bachelor of Engineering (Electrical and Electronic) with First Class Honors in 1992 and an Engineering PhD in 1998. He has been working on research covering mixed reality, human-computer interfaces, wearable computers and ubiquitous computing, fuzzy systems, embedded systems, power electronics.

He has been a keynote and invited speaker at numerous international conferences and events. He was invited to exhibit for two years in the Ars Electronica Museum of the Future, launching in the Ars Electronica Festival 2003. His works “Human Pacman”, “Magic Land”, and “Metazoa Ludens”, were each selected as one of the worlds top inventions by Wired and invited to be exhibited in Wired NextFest 2005 and 2007.

He is Editor in Chief of the academic journals: Transactions on Edutainment (Springer) and ACM Computers in Entertainment, and Lovotics: Academic Studies of Love and Friendship with Robots.

This talk outlines new facilities that are arising in the hyperconnected internet era within human media spaces. This allows new embodied interaction between humans, species, and computation both socially and physically, with the aim of novel interactive communication and entertainment. Humans can develop new types of communication environments using all the senses, including touch, taste, and smell, which can increase support for multi-person multi-modal interaction and remote presence. In this talk, we present an alternative ubiquitous computing environment and space based on an integrated design of real and virtual worlds. We discuss some different research prototype systems for interactive communication, culture, and play.